Strona główna Business card of the city of Jaslo

Business card of the city of Jaslo

Invest mood
There are nearly 3,000 business entities operating in Jasło. Most of them deal in wholesale and retail but a significant market share is also held by professional, scientific, technological, health care, construction and industrial processing enterprises. Many businesses are members of the Jasło Entrepreneurs’ Association which is an important partner to the municipal government in their action in favour of the town’s economic development.

Industrial tradition
The town vaunts rich and historically consolidated industrial traditions related to the oil, chemical, glass-making, machine-building, food and furniture industries. There are events in the economic history of Jasło that deserve special attention. These are:
– 1855 – opening the first petroleum refinery in Jasło by I. Łukasiewicz,
– 1889 – establishing the Jasło Refinery (the present name is LOTOS GROUP),
– 1924 – starting production at the Jasło Glassworks,
– 1937 – opening the State Chemical Works as part of the Central Industrial District,
– 1955 – opening ZPC Liwocz (presently GRAN-PIK Liwocz Sp. z o.o. Sp. K.),
– 1961 – starting production at ZPOW PEKTOWIN (presently owned by Naturex S.A.),
– 1996 – opening the Top Styl factory in Jasło by the Nowy Styl Group,
– 2014 – opening one of the most modern furniture factories in Europe by the Nowy Styl Group.

They have made investments in Jasło
Jasło is home to a number of reputable companies operating in international markets. These include:
■ Nowy Styl Group: A group being the third on the list of the largest furniture companies in Europe, with annual sales revenues of over €300,000,000. The company has between ten and twenty modern production facilities (in Poland, Ukraine, Germany, Russia, Switzerland and Turkey), and its own international distribution network covering local sales structures in 17 countries of the world. In Jasło, there is one of the most modern furniture factories in Europe. Its construction has been co-financed by EU funds. The whole Group has currently 5,700 employees, of whom 1,700 work in Jasło. The company’s products are sold to 74 countries and its exports represent 60% of the output. pl.nowystylgroup.com
■ Orion Engineered Carbons Group: A manufacturer of carbon blacks used in the production of rubber compounds for car tyres, rubber ware and rubber fancy goods. The Group has 15 factories worldwide (in Germany, France, Portugal, Italy, the USA, Brazil, Korea and in other countries) and is present in 100 countries. The Group’s Headquarters are located in Germany. www.orioncarbons.com
■ Naturex S.A. – A French group with 15 factories worldwide (in France, Australia, Morocco, the USA, China and in other countries), the global leader in manufacturing plant-based natural ingredients. In Jasło, the Group invests in the production of pectin and concentrates used for the production of food colours as well as in new systems for the production of fruit and vegetable powders. In addition, the Mechanical Engineering Department of Jasło successfully implements complex and technologically advanced machine building projects for the Group’s other factories, for example those in Switzerland and France. www.naturex.com
■ Fabryka Armatur Jafar S.A.: A manufacturer of cast-iron fittings for water, gas and waste water as well as fittings for sanitary and supply network systems. The company has one of the most modern ductile iron foundries in Europe. Half of the production is exported to 30 countries of the world. The most important markets include Russia, Germany, France, Italy, Spain and Egypt. The company cooperates with local subcontractors in the metal business. www.jafar.com.pl
■ Polwax S.A.: One of the largest European manufacturers and distributors of refined and deodorized paraffins, waxes and paraffin-based industrial products. Exports account for approximately 25% of Polwax’s total sales volume and its main export markets include Germany, Slovenia, Ukraine and Russia. The company is listed on the Warsaw Stock Exchange and achieves very good financial results. The company invests in modern technologies for the chemical industry and in research and development facilities by implementing the FUTURE Project development strategy. www.polwax.pl
■ Gamrat S.A.: The leader among the global manufacturers in the plastics business, a member of the Lentex S.A. capital group. The company’s offer includes gutter systems, eaves soffits, hoses, drainage channels, pipe systems, floor coverings as well as wood composite terrace boards and 3-layer wood parquets. The company takes on significant investment undertakings for its development and make international acquisitions of reputed companies, with which it constantly extends the array of its products. The Gamrat capital group consists of the Devorex capital group, PD Profil Sp. z o.o. and Baltic Wood S.A. www.gamrat.pl
■ Huta Szkła w Jaśle S.A.: A manufacturer of headlight glass for cars of all global brands, domestic and functional glassware and of stained glass made by traditional method. The main export markets are: Australia, Belarus, Bulgaria, Czechia, Finland, France, Israel, Canada, Germany, Russia, Romania, Slovakia, Sweden, Turkey, the USA, the United Kingdom and Italy. jaslo-glass.pl
■ Delta Tech Electronics: A manufacturer of modern diagnostic equipment for the automotive industry, among other, for VOLKSWAGEN and FIAT company groups. In addition, the company’s owner is a co-author of an innovative electric scooter that can develop a speed of 25 km/h or 45 km/h depending on its version, and a one-kilometre ride costs 1 grosz. After the successful first presentation at the fair in the German town of Friedrichshafen, the designers’ work begins to conquer the European markets. ww.dte.com.pl
■ Tarkett Group: The global leader in innovative solutions for floors and sports field surfaces. With a vast array of products, including vinyl flooring, linoleum, fitted carpets, rubber flooring, wooden and laminate flooring, synthetic grass and running track surfaces, the Group has won customers in more than 100 countries of the world. Tarkett’s 11,000 employees and 30 production facilities contribute to the daily sales of 1.3 mill. m² of flooring. The Group’s Headquarters are located in France. Because of its new investments in Jasło, the company is recruiting additional specialist and technical staff, including production line operators. www.tarkett.pl

Human capital
Jasło has considerable resources of unused labour force: in 2015, the Jasło County unemployment rate was 15.2%. Among the registered unemployed, the largest group comprises people aged between 25 and 34 (29.1% of the total number of the unemployed). Among Jasło jobseekers, the majority (54.9%) have basic vocational, post-secondary or vocational secondary education but there are people with higher education as well (16%). The trades and professions that are overrepresented among the registered unemployed are: locksmith, mechanical technician, chemical laboratory technician, metal turner, packer, tailor, sales assistant, cook, chef, hairdresser, pastry cook, motor vehicle mechanic, economist. The Mayor of Jasło pledges personal involvement and assistance, if necessary, in contacting the entrepreneurs with the Jasło County Employment Agency for recruitment of qualified staff.
Jasło has well-developed and well-functioning school infrastructure including primary, secondary and post-secondary schools and two higher education institutions. The educational offers of Jasło’s upper secondary schools are very attractive. On average, about 1,200 students leave the schools every year, mostly as technicians and associate professionals, industrial workers, craft trade workers, service workers and sales assistants. The structure of school leaving certificate holders is as follows: Secondary Schools of General Education – 43%, Secondary Technical Schools and Basic Vocational Schools – 57%. Those graduates of Jasło’s upper secondary schools who continue their education mostly choose universities in Rzeszów (36%), Krakow (26%), Jasło (16%) or in other national academic centres (22%).
Podkarpacka Szkoła Wyższa w Jaśle is one of the two higher education institutions of Jasło. Its students can choose from among the following first and second cycle programmes and majors: economy, spatial development and transport (including logistics and traffic engineering). The Jasło Campus of the Lodz University of Humanities and Economics offers first cycle programmes and online studies in Education and Political Science.
Graduates of Jasło’s upper secondary schools also enrol for courses in Krosno, a town 20 km away from Jasło. In the State Vocational College of Krosno, they can undertake B.Sc.Eng. degree programmes in the following fields: Mechanics and Mechanical Engineering (including numerically controlled machines, mechatronics and car diagnostics, aircraft engineering, Virtual Designing and Manufacturing), Computer Science, Environmental Engineering, Civil Engineering, Energetics, Management.

Competitive labour costs
The average monthly salary in Jasło County makes up 78.6% of the country’s average and 92.5% of the Podkarpackie Province’s average (2015).

Transport accessibility
Jasło is situated on important intersecting national traffic routes. These are DK 28 (from Zator to Medyka) and DK 73 (from Jasło to Wiśniówka). The DK 28, which runs through Jasło parallelly to the A4 Motorway and the DK 94, is an important artery in the Podkarpackie Province. Better transport connections between Jasło and the A4 Motorway are currently being considered, with a concept allowing for re-construction of National Road 73 between Jasło and Pilzno. The concept ultimately aims to modernize a part of the road and to build new sections of the road which would be the ring roads for Brzostek, Kołaczyce and Jasło. In Jasło, there are also the starting points of provincial roads. These are: DW 992 from Jasło to Ożenna and DW 988 from Warzyce (at the Jasło town boundary) to Babica. Additionally, Expressway S19 is being planned to be built to connect Jasło through the modernized National Road 28. There are also two railway lines running through the town: No. 108 – Stróże-Krościenko and No. 106 – Rzeszów-Jasło. The distance from Jasło to the motorway is satisfying, as it is 60 km, similar to the distances between Jasło and the international airports in Rzeszów Jasionka (80 km) and Krakow Balice (155 km). Jasło has, however, a landing pad for helicopters and small planes.

Good location near the border
Situated near the border, Jasło has an extremely convenient location relative to the Central and Eastern European markets. The distances from the PL-UA border crossing points are 122 km (Krościenko) and 140 km (Medyka), and those from the Slovak border are only 55 km (Barwinek) and 70 km (Konieczna).

Pro-investment planning documents
The area of Jasło is largely covered by local master plans (LMPs). There is a relevant LMP for as much as 95% of the areas earmarked for investment. In addition, the Municipality of Jasło is updating the Key Diagram to meet the entrepreneurs’ needs.

Professionalism and favour for investors
In 2002, the Municipal Council Jasło was awarded with the ISO 9001:2008 certificate that guarantees efficient and professional service for all Council visitors and customers. The average time needed to process any affair by the Municipal Council of Jasło in the years 2011-2015 was 3.36 days. Moreover, the local government of Jasło is sympathetic towards investors and entrepreneurs. A number of activities are undertaken under the Economic Development Forum to identify the needs and expectations of Jasło entrepreneurs and to stimulate the town’s economic development.
The Mayor of Jasło pledges support and full commitment of the Municipal Council of Jasło in limiting the time needed to complete the necessary formalities to obtain permits for new investment projects to a few months.

“To the source” – traditional singing workshop

Do you like interesting challenges? Apply for the “GENIAL Ideas Exchange”...

Free seats at the Junior University 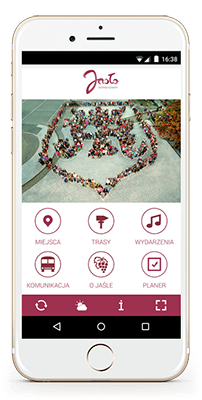 “To the source” – traditional singing workshop

Do you like interesting challenges? Apply for the “GENIAL Ideas Exchange”...

Free seats at the Junior University